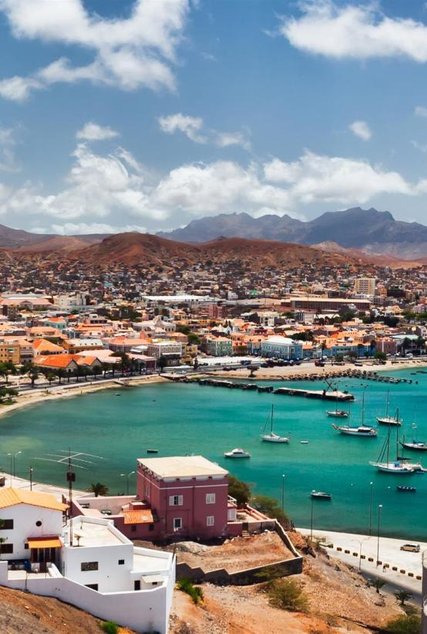 View the locals of Cabo Verde

São Vicente is located in the northwestern part of Cape Verde. Nearest other island is Santo Antão, whit a daily boat connection (about 60 minutes sailing). In terms of nature, the island of São Vicente is relatively arid and largely flat, except for three medium-sized mountains. The inhabitants of the island live mainly from the fishing and the large port of Mindelo, where ships moor to replenish supplies before they travel. Mindelo is culturally the most important city in Cape Verde and is known for its swinging and multicultural character: it is the place for traditional Cape Verde music and dance.

São Vicente was discovered by the Portuguese at the same time as most other Cape Verdean islands in the 15th century. Because São Vicente is a relatively dry and arid island in terms of landscape, there was initially little to no enthusiasm to live there. Life on the islands in the neighborhood was so much more attractive, because of the greener and more fertile environment. Only from the 18th century more people came to live in São Vicente. The natural bay with its basin in the northwest, once created by a volcanic eruption, was seen by the British as the ideal place for a port. Here Mindelo was founded. The city developed into a major port of call in international shipping in the 19th century. Mindelo became the cultural center of Cape Verde due to its international character.

The nickname ‘island of culture’ owes São Vicente entirely to its capital Mindelo. The large port used to ship many ships with crew from all corners of the world. During their brief leave on the island, the crew also wanted some fun, which made Mindelo a city full of bars, restaurants and lots of live music. Despite the fact that fewer sailors visit the island nowadays, cultural life has persisted. Thanks to its international character, many Cape Verdean artists and musicians also settled in the city. Mindelo has been undergoing a modest revival in recent years. You can experience the heartbreaking morna or the melodic coladera live in Mindelo, like al other traditional music.