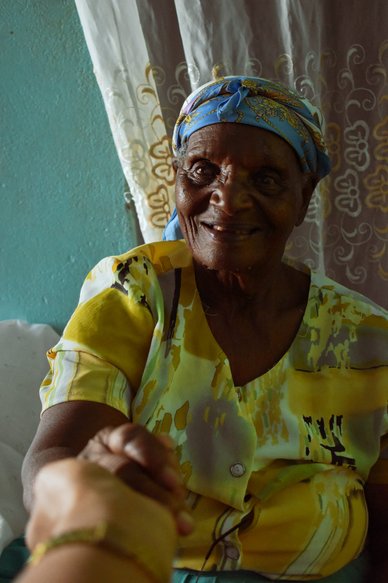 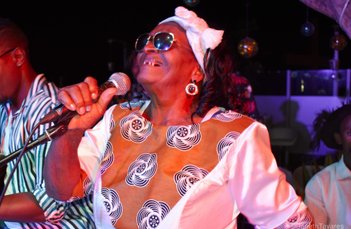 Nosagenda was with Isidora Semedo Correia, better known as Nha Balila, in an
incredible moment during which it was proven how special this woman is.
Born on December 12, 1929, she has an incredible and detailed memory of the Creole
way of life, of her survival experience and of the cultural and social events that mark
the history of Cape Verde. According to the public opinion, she remains an attentive
and active personality until today. For that reason, it is being said that she is a thinking
historical archive".

Her blindness has not limited her in the practice of and love for one of the most striking
and profound artistic expressions of the Cape Verdean identity: Batuku. Considered by
many to be a Batuku queen, she has always written her own lyrics, believing in the
power of words. She is a very communicative person. She has two edited albums and
she had a Batuku group called Bali Pena, also known for doing Finason in freestyle
mode.
Being a reference for many youngsters by the expression

“Dentu di alguen ki e alguen”
(the interior of a person is the most important), she has recently been participating in
music by artists from the Cape Verdean youth scene.
She is a charismatic figure in her residential neighbourhood Tira-Chapéu, in the city of
Praia (Santiago) where they named a library after her (Biblioteca Nha Balila) and made
a street graffiti of her face.

Thus, we honour her life and path in the area of ​​social intervention and community
service, which has contributed to civic and cultural development on the island of
Santiago; also proven by the many diplomas she has.

We know that your connection with Batuku originates from your childhood. How
were you brought up and who did you learn to do Batuku with?
I was born and raised in Serra di Malagueta, (Santa Catarina, Santiago). In a life filled
with field activities, I didn’t know for years what a town or city was. I was taking care of
animals and plantations, going up and down mountains, carrying water in a can on my
head, collecting firewood from the txada ... So many things; preparing food that didn&#39;t
vary much from tentenren, pastel, camoca, couscuz (couscous), tocinho, batata
(potato), feijão (beans) with xeren, mandioca com bode (cassava with goat) or massa
com galinha (pasta with chicken) ... We didn't know what rice was and nu ka konxe
fatiota (we didn´t know about treats) and it was for that reason that I always say that
today I am:

This is due to vision problems. At the age of 10 my father took me to school and in the first week of classes the teacher put me on the street, saying that without a vision I could not learn nor be there. I cried a lot and I ended up working with my mother who was already a Batukadeira. I did everything with my mother. Where she was going to do Batuku I went as well. Moreover, people were saying that I was smart and I was gaining motivation to learn. At the age of 16, I had already travelled all over the Serra Malagueta doing Batuku. At that time an uncle of mine saw me dancing and said "Balila bu bali pena propi" (Balila has a lot of worth) and for that reason my group of Batukadeiras was renamed Bali Pena.

After having been there for 3 years, I went to the fields in São Tomé where I found my (now deceased) husband. We got married and came to Cape Verde together. He took care of me and it was through him and thanks to God that I became a known woman. There is a remarkable date, on July 5, 2005, at Praça da Alegria (Praia) where I was given the word. It was broadcast in several countries.

I worked on two CDs, one with Zé di Sucupira and the other with Zé Orlando from Editora Sons D'Africa.

Then came the "dentu di alguen ki e alguen”, which was actually an expression that came from an episode of my childhood during which I asked my father why two children were fighting but stopped as soon as the parents arrived. There was a lot of respect. Right then, as a child, I made that song. However, it was only several years later that I was able to record it.

There was a time when the Catholic Church banned Batuku (before independence), and one day during that time a sister of mine was going to get married. The entire family was together along with a catechist, whom I asked if I could do some Batuku. He said no, otherwise the priest would not bless the bride and groom. However, I insisted on it being just music, which was not a sin. And in fact we ended up drumming until the next morning. My sister went to church and the catechist said nothing to the priest. Everything went smoothly and after the ceremony, we did Batuku from Assomada to Serra Malagueta. After that, I was asked to perform at various sites and events.

What does Batuku mean to you?

For me, Batuku is the best tradition in the world. Cheer me up, comfort me ... Si n'sta tristi n'ta bira alegre. Si n'sta ku fomi n'bira fartu (If I am sad, I make myself happy. If I am hungry, I satiate myself).

It is worth remembering that there is an "old and new" Batuku: there are differences in the details of the clothing and accessories used, for example, also linked to freedom of expression.

When Cape Verde received independence, I was able to make my music freely. Because I was already a militant of PAIGC, therefore opposed to the Portuguese State, I saw my art suffer repression.

The process of freedom was far from easy, many lost their lives, were arrested, ... Thank God I survived. Then I made a song to celebrate, which talks about victory and Amílcar Cabral.

(Amilcar Cabral, you are the best son of our country, you really are. The colonialism killed Cabral.)

With this song, I was chosen to host the Summit of presidents of PALOP countries in Cape Verde more than once.

What does Independence mean to you?

It means Cape Verde is on its own feet, sakédu. Cape Verde developed greatly after Independence.

My biggest concern are the young people who have not been doing well in our society, with assaults, violence etc... But I hope that we will improve in all aspects.

If you could teach a child Batuku what would you say to learn?

I would tie the cloth; teach how to play the txabeta, and how Finason questions and answers works. There are also ways to put your voice to the group. I would teach how to feel the rhythms and how to match them with words. Mainly teach respect and transmit the values ​​of our culture.

And how was it at the time of Nácia Gomi, Nha Mita Pereira, Nha Bibinha Cabral,...? They used to meet on Batuku cycles, right?

Yes, especially with Nácia, because we were raised together and lived close to each other. Our mothers were friends. Nacia was more of Finason, not drumming and dancing.

We lived in very good times.

And I continue to live. Today I have a home, thanks to God and the friendship of the people. There are many people to whom I am grateful and they have helped me a lot.